Business News Agency August 11 News Medical oxygen, medical ozone and corresponding oxygen equipment are popular medical products in the international market, but in our country, due to various reasons, only use oxygen or ozone (disinfectant) in the hospital. With the further increase of China’s national income and the improvement of the quality of life, it is believed that various small-scale or domestic oxygen generators will enter ordinary families in China, especially families with elderly patients.

Medical oxygen is used as an emergency medical gas and has been used clinically in hospitals for at least 100 years. In particular, the “hyperbaric oxygen chamber” developed in the 1960s has saved the lives of thousands of people who suffer from toxic gas poisoning such as carbon monoxide and people suffering from “dive-disease”. In addition, medical oxygen has been widely used abroad in recent years for new applications such as mountaineering enthusiasts, family beds and beauty salons. In short, medical oxygen has long been used in hospitals in the West and has been used by many departments. According to foreign media reports, almost 30% of the elderly in the United States are equipped with oxygen pillows, oxygen bottles, and even domestic oxygen generators. In China's market, 5L compact domestic oxygen generators are still rarities, and there is no product development and listing. In fact, 5L medical oxygen generators are not expensive in foreign countries. According to reports, the cheapest 5L home oxygenerator on the US market sells for only 680 US dollars each, and the most expensive multi-functional household Oxygen Generator is sold. But also more than 2,000 US dollars per station, this is not a big burden for high-income European and American families.

Whether in Western developed countries or in China, medical oxygen is regulated as a medicine. It is reported that in our country, there are still some local hospitals that directly use industrial oxygen instead of medical oxygen that is slightly more expensive. This is an extremely immoral act and it is not permitted by law. If hospitals in the United States and other western countries dare to use industrial oxygen for patients, once they are reported, hospitals will face high fines and doctors may even be sentenced.

Traditional medical oxygen is mostly filled with pressure cylinders, or liquid oxygen is used directly. However, for the hospital, not only is the operation troublesome and unsafe, but also the use of medical oxygen for the cylinders will change the pressure during use. The nurse must adjust the flow at any time, which is very inconvenient. In the world after the 60s of last century, the use of "pressure swing adsorption technology" (PSA) to produce medical oxygen has been used up to now.

PSA oxygen equipment is relatively simple, small size and low failure rate, maintenance is very convenient. Its oxygen output pressure can be adjusted, with better quality and purity. The working life of a Psa Oxygen Generator can reach 15 years or more. At present, pressure swing adsorption oxygen generators have become the most popular medical oxygen equipment used abroad. Its working principle is to use the zeolite filled in the machine to absorb the nitrogen in the air under pressure and leave the oxygen. After decompression, it releases nitrogen to enter the atmosphere. This cycle is used.

In recent years, foreign manufacturers have successively developed and marketed a variety of portable PSA oxygen generators, the size of which is generally only the size of the trolley case used by air travelers. Such products mainly include 5L brand PSA oxygen generators produced in the United States, such as Sequal Elipse. Some household or personal 5L oxygenators have pulleys underneath the base to allow people to drag on the ground. Portable oxygen generators are not only suitable for use in family beds, but also for tourism use for mountaineering teams, sea cruises, and field workers, such as exploration teams and field hospitals.

U.S. manufacturers recently introduced an "Oxford-style" pocket PSA oxygen generator that can be carried on the back. It is more suitable for use by alpine mountaineers (because of its lighter weight). The invention of the backpack type PSA oxygen generator can completely prevent the dangerous situation that the oxygen in the small oxygen cylinder carried by the climber runs out of oxygen. The backpack PSA oxygen generator is also equipped with accessories such as oxygen mask and oxygen tube, which is very convenient to use. However, the price of this novel Oxford-type PSA oxygenator is not cheap, priced at around 2,700 US dollars per unit. It is indeed very suitable for alpine sports enthusiasts to use.

Small PSA oxygen generators have already entered thousands of households in developed countries in Europe and America, but in China, they have not yet been promoted. This may be related to national conditions.

In recent years, a new type of medical device called "Ozone Generator" has begun to sell well in European and American markets. The so-called ozone (O3) is a special gas composed of three oxygen atoms. Because it has a special smell, it is called ozone. Since ozone is extremely unstable in the air, it will soon release an oxygen atom and become stable oxygen. Therefore, ozone is clinically used as a strong disinfectant.

In the past few years, Western researchers have done a lot of research on ozone and found that it has a lot of interesting new medical uses: 1. Treating retinal (dry) macular degeneration. 2. Chronic ischemic diseases. 3. Treatment of severe pain caused by disc herniation. 4. Acute and chronic infections. 5. Treatment of osteomyelitis. 6. Autoimmune system diseases.

Now, overseas market has developed a variety of specifications of the ozone generator, and put into practical clinical applications. According to the latest reports from foreign media, the use of ozone and corresponding accessories generated by a special ozone generator can be used to treat the common symptoms such as severe toothache caused by root rot, and has excellent efficacy. Since the water solubility of ozone is 10 times that of oxygen, ozone can also be processed into a liquid agent for clinical use. In general, ozone will become oxygen when it evaporates off an oxygen atom, so there is absolutely no harmful residue and it is very safe for the human body. In the future, ozone generators will play an increasingly important role in clinical treatment. It is understood that currently in the European and American markets, the price of a medical ozone generator is roughly between 1,500 and 2,200 U.S. dollars. Although hundreds of companies in our country produce ozone generators, these products are mainly used for disinfection in hospital wards. The number of companies that can really produce therapeutic ozone generators is relatively small in China. According to foreign reports, the quality of ozone for clinical use is particularly high, and nitrogen and other impurity gases are not allowed. Once ozone containing nitrogen oxides is used for therapeutic purposes, it not only fails to achieve therapeutic goals, but also brings greater pain to the patient, while the ozone generator as a disinfectant has lower quality requirements.

In summary, medical oxygen, medical ozone, and corresponding oxygen production equipment are relatively popular medical products in the international market. However, in China, due to various reasons, only oxygen or ozone (disinfectant) is used in hospitals. With the further increase of China’s national income and improvement of the quality of life, it is believed that various small-scale or domestic oxygen generators will enter ordinary families in China (especially those with elderly patients). According to foreign media reports, the United States annually produces and sells more than 100,000 5L PSA oxygen generators, which are mostly used in home wards. But in our country, this market has not yet been opened.

In short, the development of pocket-sized PSA oxygen generators that can be used by home, travel or mountaineering teams is a major trend in the international market. It is believed that such medical device products will surely have a huge market growth space.

Gamma 99% Purity Industrial Oxygen Generator is used to produce oxygen with purity up to 99%.  It is the combination of standard 93% purity oxygen generator with one oxygen purifier.  Detailed parts combination is as below: 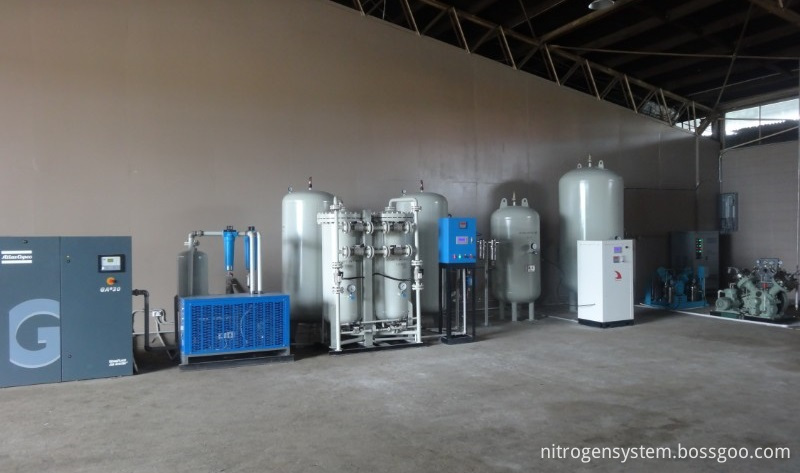 Function: provide compressed air source for the PSA oxygen generator, the flow and pressure are to be decided by the desired oxygen flow rate, purity, outlet pressure. As it is the air source of whole system, the performance of air compressor has remarkable influence to the whole oxygen generator system. Air source must be stable, sufficient with pressure not less than 7.5 bars.

It quickly increases the pressure of adsorber;

It is the key part of whole system. In this part, the oxygen is separated from compressed air, sent to buffer tank as produced gas. Nitrogen, carbon dioxide, argon,etc are discharge from muffler as exhausted gases. The efficiency of this machine is mainly decided by adsorption tower structure, air distribution structure, molecular molecular sieve performance, process flow, etc.

To help the performance of oxygen purifier, one oxygen storage tank is supplied.

After treatment of oxygen purifier, the 98% purity oxygen has very low pressure, for getting higher pressure, another oxygen storage tank is supplied.

As the 99% purity oxygen pressure is very slow, to get 150 bars pressure, one oxygen compressor is needed.

It is used to fill the high pressure oxygen into cylinders for storage or selling.